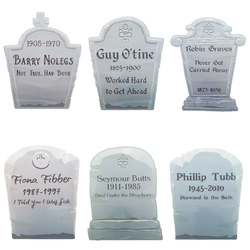 This item can be shipped to the following countries: Canada, USA

We gather here today to mourn the loss of six beloved locals. These are their obituaries.

Fiona Fibber: A young lady taken too soon. Born in 1987 and died in 1997 of illness. She had quite the imagination. She was always making stuff up just for fun. However, this time, she wasn't crying wolf. She truly was sick, and she told us so.

Barry Nolegs: Lived a long life, born in 1905 and died in 1970. Due to his unfortunate surname, it was rumored he had no legs. From the cradle to the grave, he insisted he had two. Even before burial, nobody thought to check.

Seymour Butts: Born in 1911 and died in 1985. He was no pirate, but he was always on the hunt for booty. Legend has it, he was under the vent when Marilyn Monroe's dress flew up in the air. Some say he co-wrote "Baby Got Back" with Sir Mix-a-lot almost a decade before the hit song's official release. He passed away under the bleachers at a packed stadium. At least he died doing what he loved.

Phillip Tubb: Born in 1945, died in 2010. He was a clean fellow who bathed twice a day. After one busy, dirty workday, he soaked in the bath, fell asleep, and drowned. He was the cleanest corpse we've ever embalmed.

Robin Graves: Born in 1875, and died in 1956. She always knew how to hold things down, but was never afraid to dig things up, if necessary. Before her passing, she took her approaching end very well and peacefully went. What we're trying to say is she never got carried away.

Guy O'Tine: Born in 1825 and died in 1900. He was a professional blade polisher during the French Revolution, the best in the business folks say. One day, he was at his usual work polishing a blade when a faulty rope snapped. Until his sudden demise, he worked hard to get ahead.


Write A Review
Back